FREE Shipping for orders over 299USD! 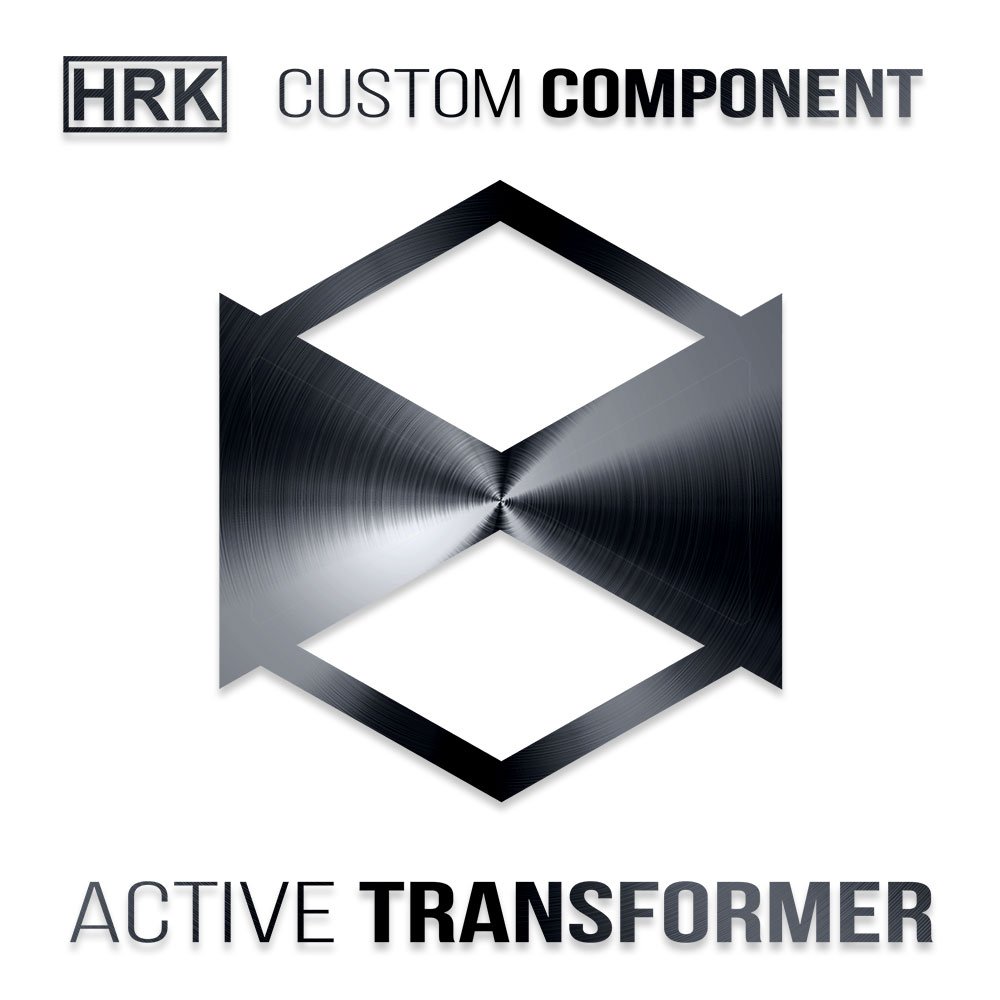 Audio transformers are widely used in professional studio equipment for decades. At the beginning of the audio electronics, transformers were used to match the valve amplifier and the speaker, to generate the balanced signal, to amplify the signal from a microphone, to match the source and the load, and for many other applications.

With the development of semiconductor components and integrated solid-state technology, new circuits were designed to replace the transformers providing better performance, cost, and space savings. Despite that, transformers are still used in many studio devices because they produce a subjectively pleasant sound.

It should be pointed that transformers are, in fact, quite primitive electronic components burdened with many flows and problems. Transformers are susceptible to electromagnetic interferences, and the frequency response depends on load and source impedance, negatively influencing the overall performance of analog studio equipment.

There are ways to overcome those issues, usually by generating higher manufacturing costs and the space usage required to install a larger transformer.

The answer is simple. Because transformers sound good. Complex processes of saturating the transformer core, parasitic components present in the transformer, and even the type of material that the core is made of generate the cocktail of harmonics perceived by the human ear as pleasant. In modern recording applications, transformers are overloaded on purpose to generate more harmonics. Most often, audio engineers are not aware that the saturated transformer is not working properly, cutting off the lowest and highest frequencies, or reducing the output signal level.

Is there a way to get all the benefits of the transformer while removing all the problems?

The Active Transformer design is completely analogue. No DSP processing, no tricks, just understanding and using the laws of physics!

Depending on the signal level and the output impedance of the circuitry which drives the transformer, transformers can introduce the low-end roll-off. In general, if the signal level is higher, the LF roll-off is more pronounced, which is caused by the saturation of the transformer core. This might cause a problem for the low-end rich music content. If you are trying to get a “fat sound” on the kick drum by saturating the transformer output stage of the mic preamp, you may end up with less low-end content instead…and possibly degraded overall sound.

The plots below show the low-end roll-off of the medium-sized output transformer at 3 different drive signal levels. The plots also show how the HRK Active Transformer performs under the same conditions. The source impedance is 50R, and the load impedance is 10k, which is a typical input impedance of a line input on the typical audio insterface. 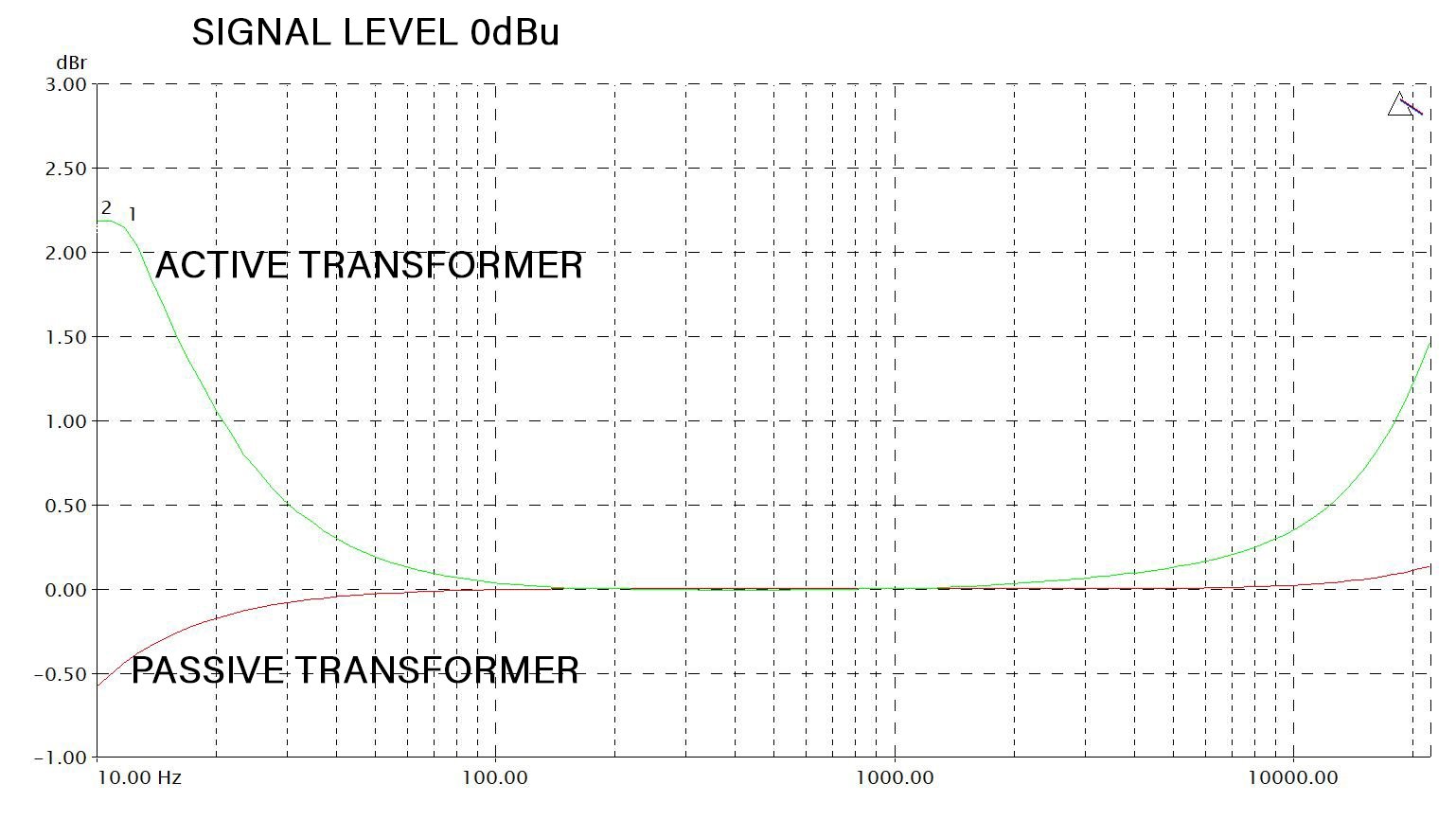 At the 0dBu (0.775V RMS) signal level, the low-end roll-off of the passive transformer is only -0.5dB@10Hz, which is an almost perfect result. The Active Transformer, however, boosts the 10Hz up to 2.2dB. The frequency response of the Active Transformer can be set to be completely flat for LF and HF if necessary. Presented frequency response was set to compensate losses that may happen at the input stages of the following audio devices. Each input stage is a high-pass filter that cuts off a bit of the low-end response. 1.5dB boost for the 22kHz is the “air” effect desired by modern audio engineers and, in addition, compensates for the HF losses which may occur in the signal cables. 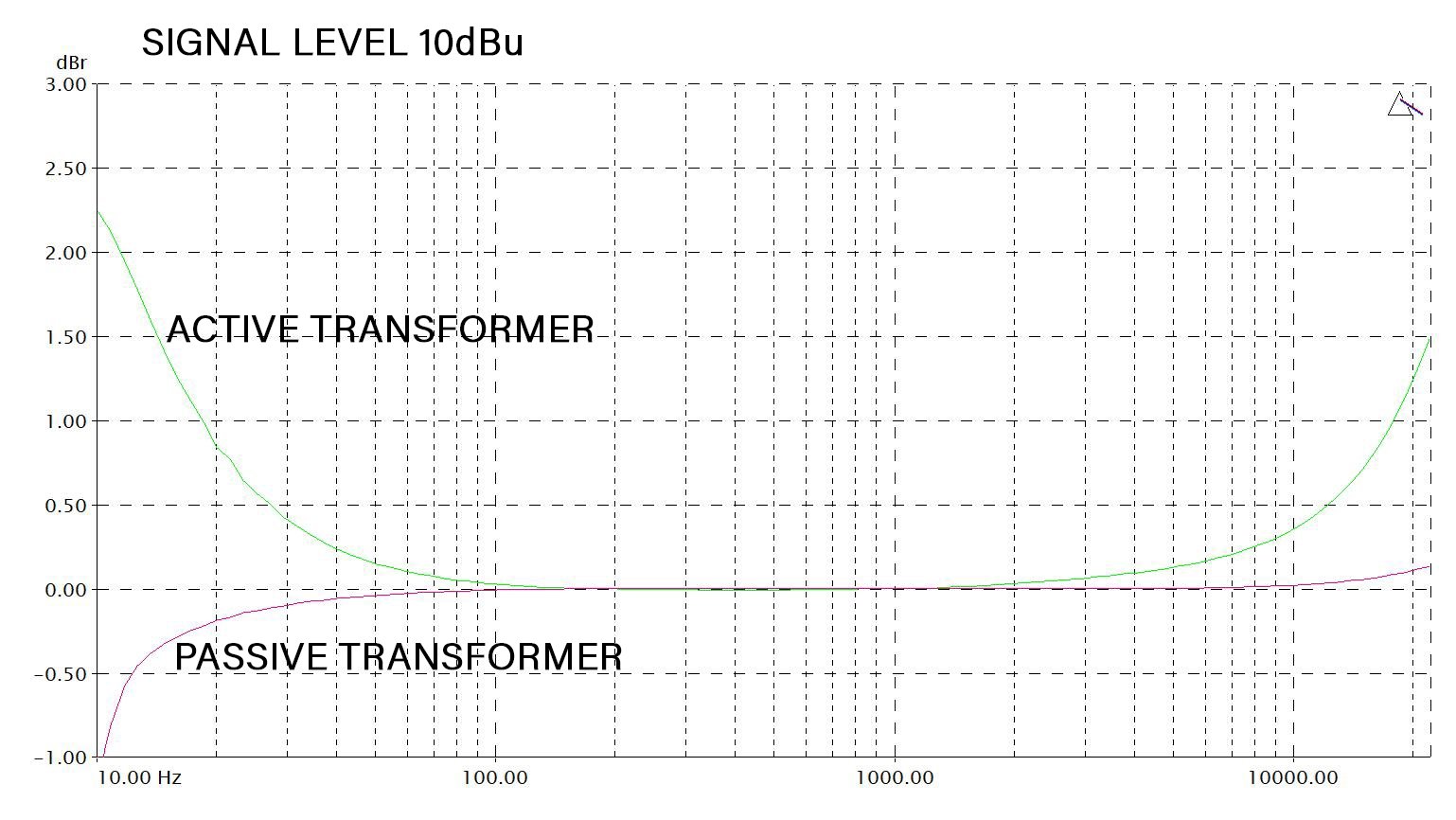 At the +10dBu, the LF roll-off is more visible. -1dB loss at 10Hz is still acceptable. The performance of the Active Transfomer has not changed. 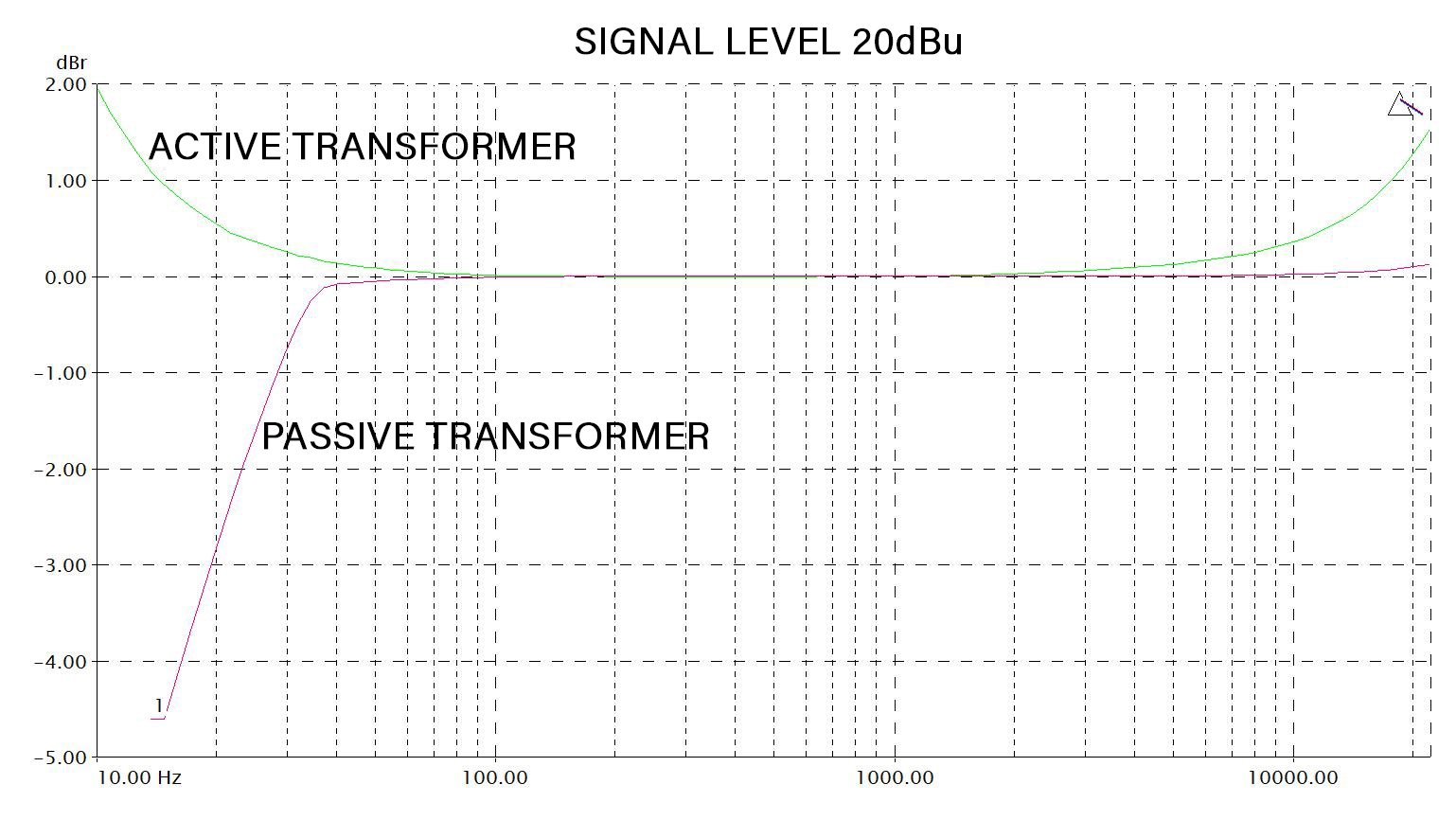 At +20dBu, we can see the sharp cut-off of LF. The -3dB@20Hz may cause problems in some applications. The performance of the Active Transformer did not change in any significant way.

The output level and the HF response vs. the load impedance. 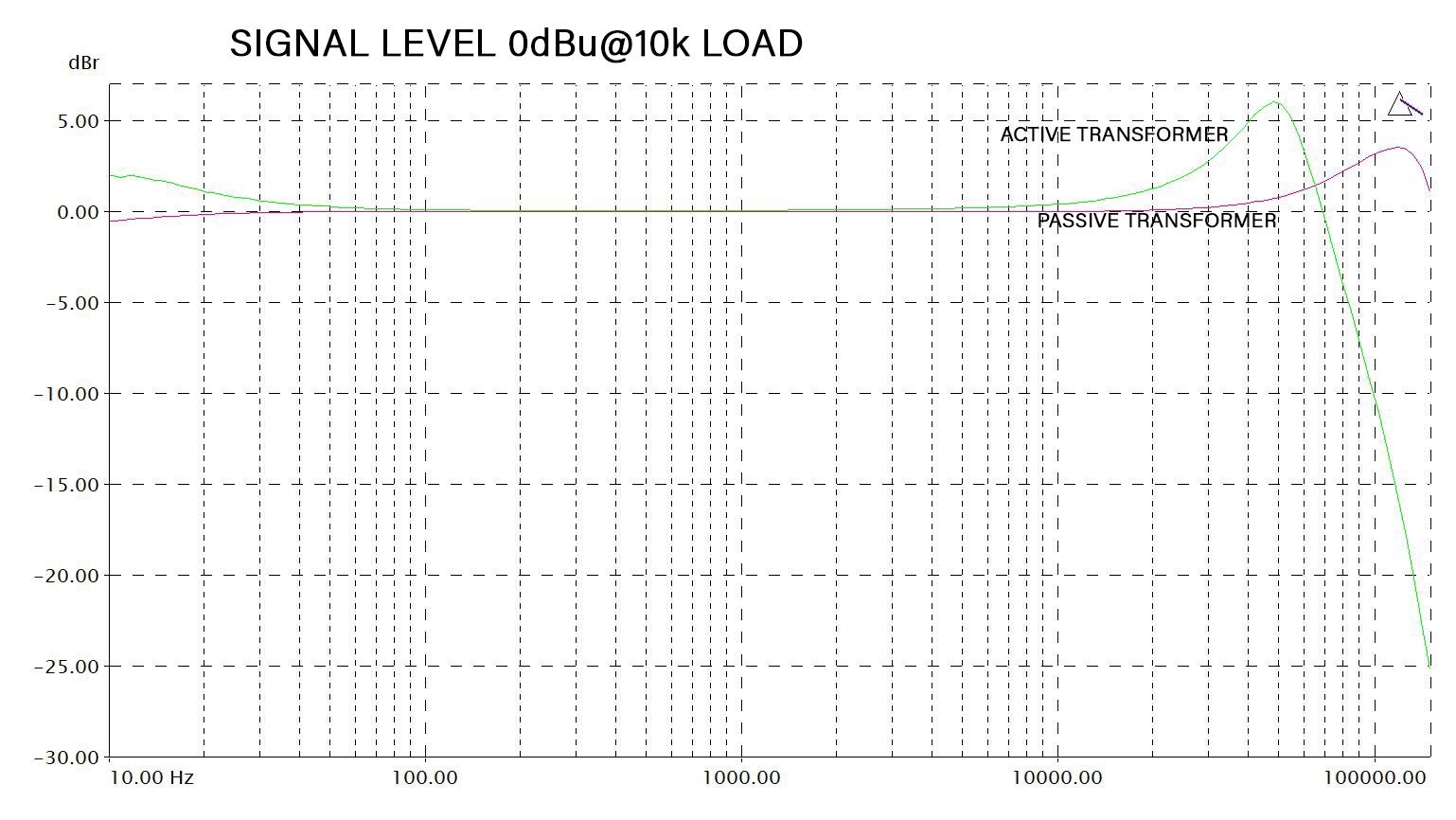 The resonance of the Active Transformer can be set to any desired frequency or can be removed completely, making the HF response flat. 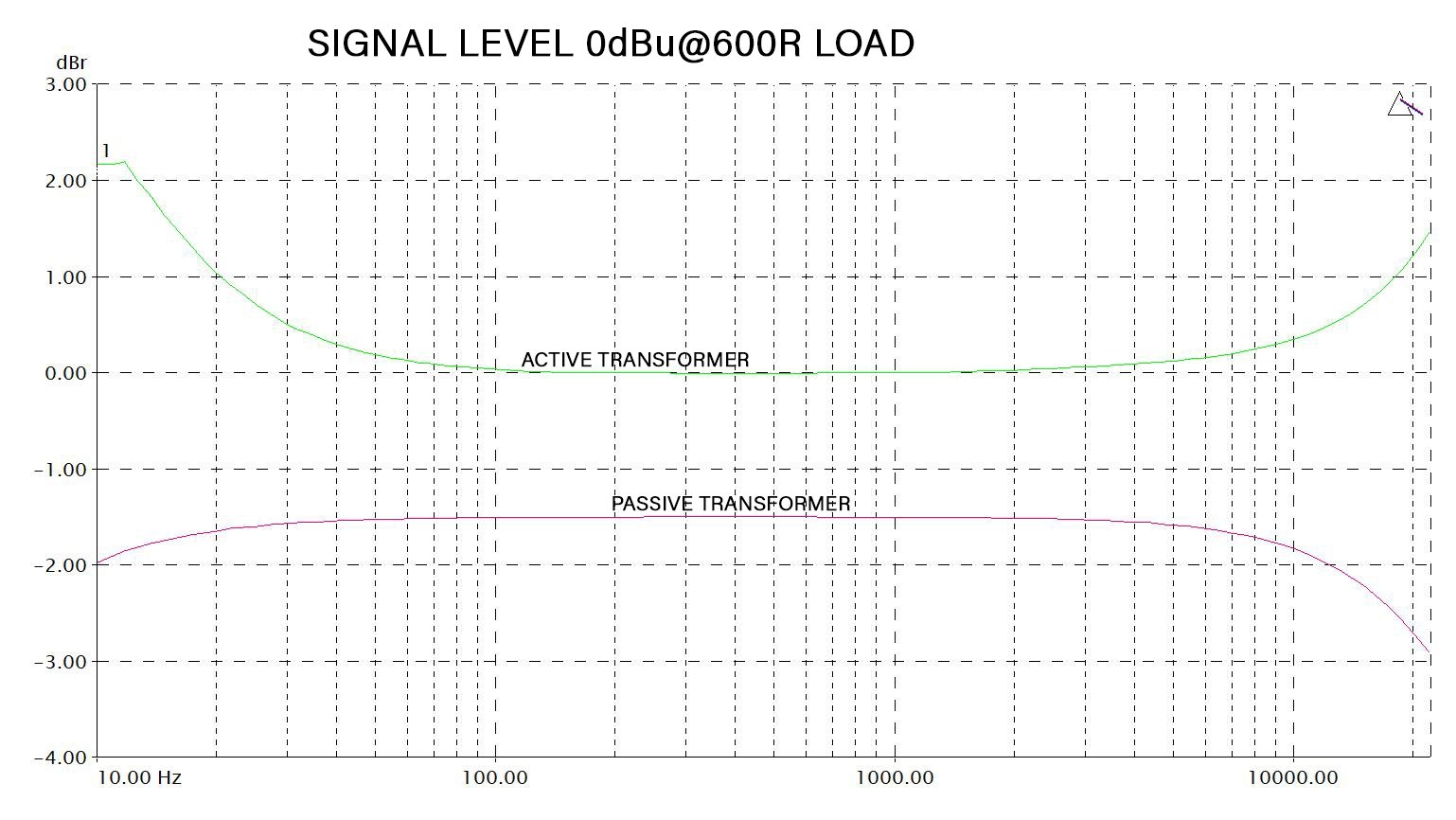 At 600R load, we can see that the passive transformer is performing much worse. The overall signal level is reduced by -1.5dB, and the HF response is reduced by nearly -3dB@20kHz. The LF roll-off is also apparent. The Active Transformer performs at 600R load with no issues.

The harmonics content is responsible for the sound of the transformer, sometimes described as “fat” or “dark”. For the test purposes, the passive and active transformers were driven with the 100Hz signal at +20dBu with the 10k load to better show the harmonics spread. 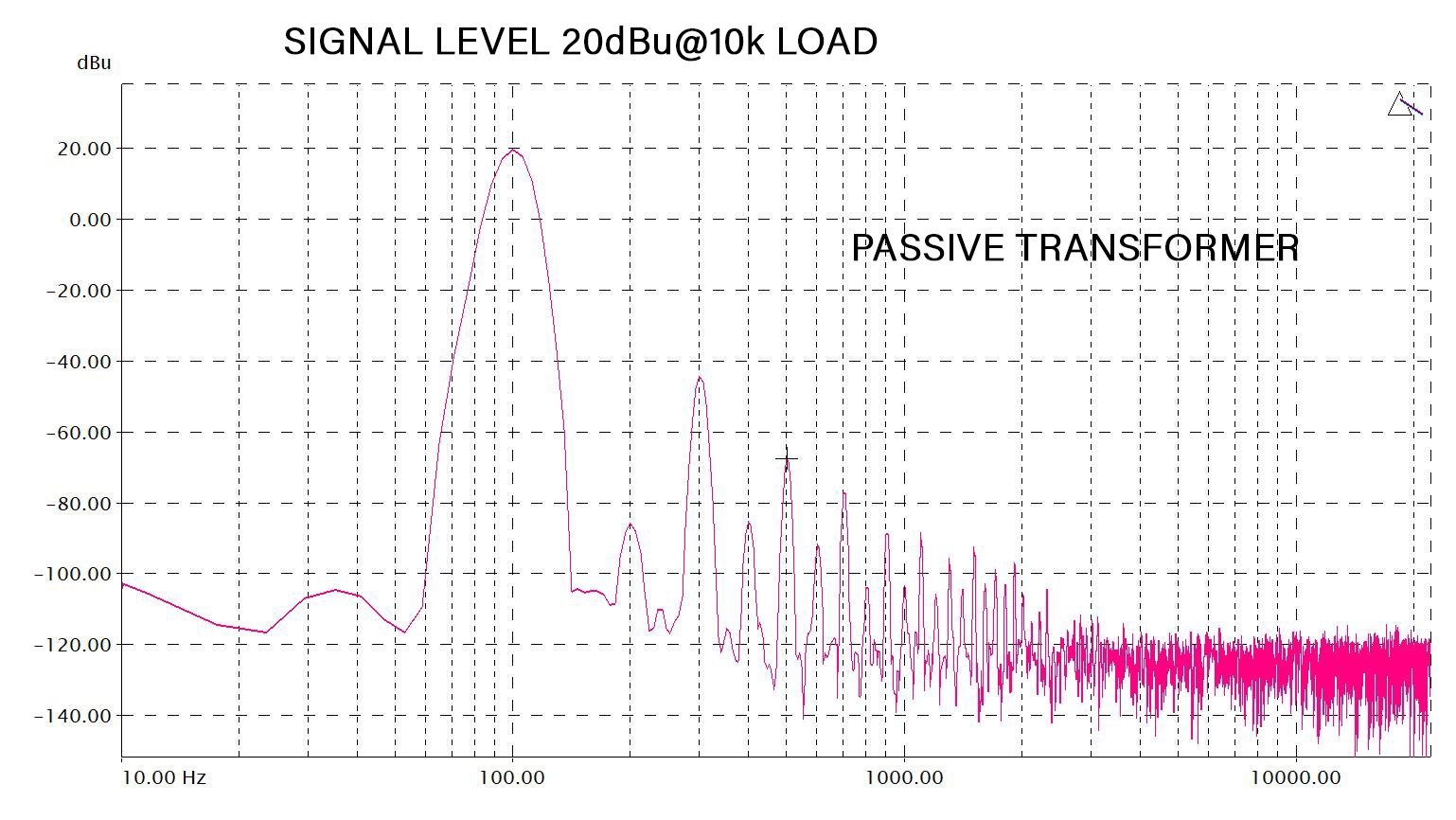 The plot shows a clear dominance of the odd harmonics starting from 3rd. We can see a fairly low level of 2nd and 4th harmonics. This suggests that the sound of a tested passive transformer may not be so warm or fat… 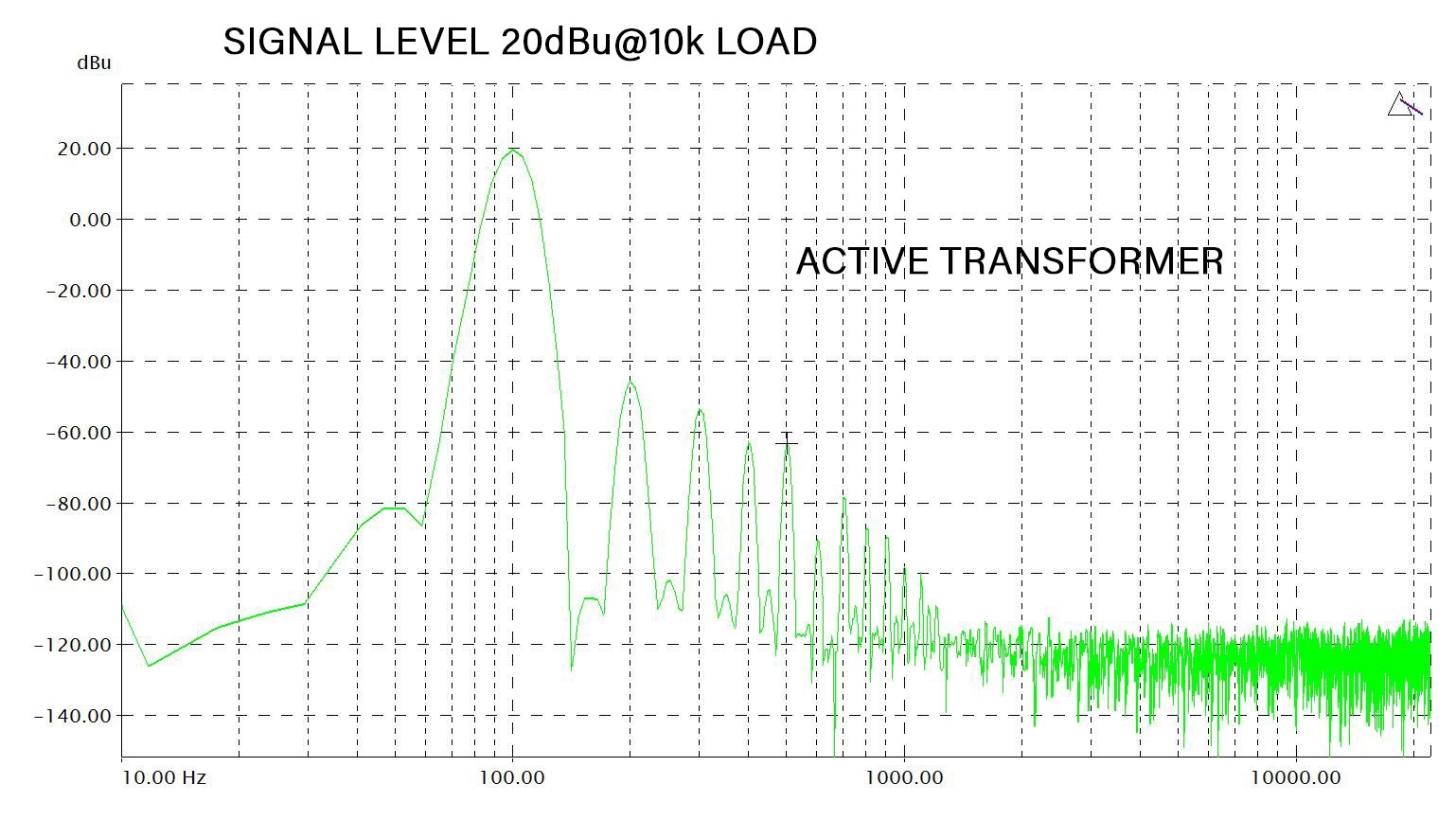 The Active Transformer plot shows a dominance of the 2nd harmonic with the even spread of all following harmonics. This may suggest that the sound will be rich in perceived tonal response.

Power consumption: up to 20mA

If you are interested in more technical details or in licensing the HRK Active Transformer design, don’t hesitate to get in touch with us here ->