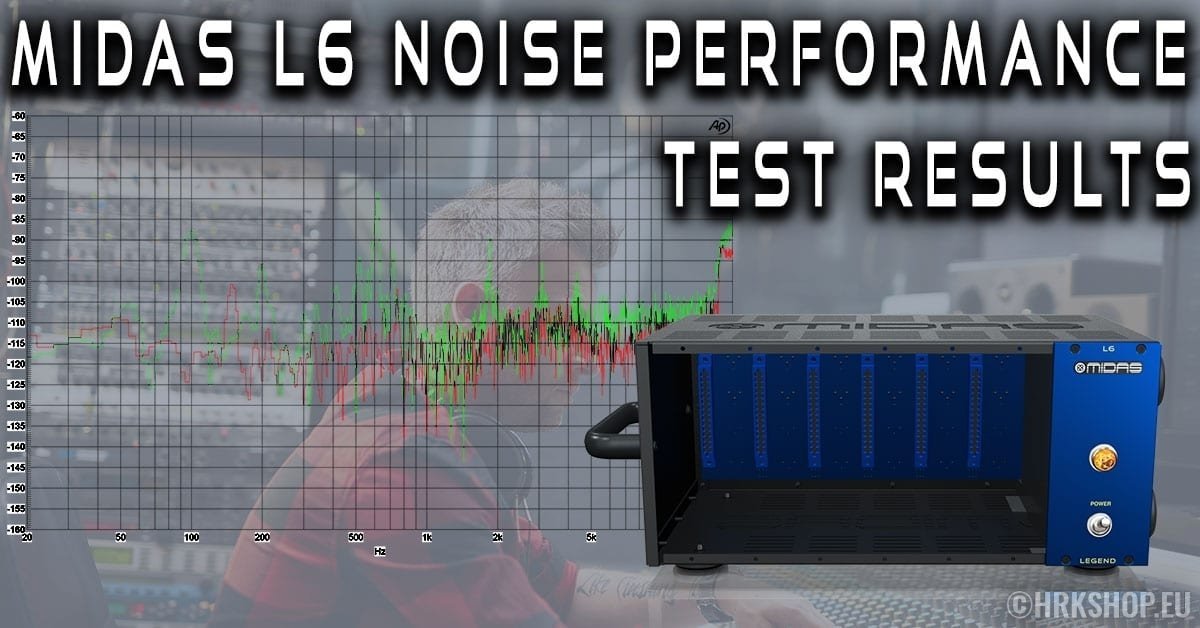 This article presents the noise test results of the MIDAS L6 500 rack.

Both preamplifiers were set to +40dB of gain and inserted in the same rack slots to ensure equal test conditions.

All tests were conducted using the Audio Precision test system.

The Midas L6 rack is very popular among 500 format enthusiasts. Mainly due to the low price which ranges between 150-200USD. The way to reduce the cost is to use the Switched Mode Power Supply. The SMPS has many advantages such as low weight, small size, mains voltage versatility and better efficiency.

The possible issues, especially in audio applications, may be caused by the operation principles of the Switched Mode Power Supply. The SMPS can produce audible harmonics, the form of residual noise which can transmit to the signal path. Such noise is more audible if the 500 module amplifies the signal from the microphone or other low-level source. There are a few ways how the switcher noise can get to the signal path. The first and most common are the power supply rails, the second is electromagnetic or electrostatic coupling, and lastly, the chassis, especially if the mains ground is corrupted.

In reality, all the above factors have an influence on the overall noise performance of the 500 rack and the installed 500 modules. The 500 modules which use the transformers will be more vulnerable to electromagnetic interferences. The 500 modules with electronically coupled inputs may pick up the noise from the chassis ground in the form of local ground loops.

For the purpose of the test, we used two microphone preamplifiers set to +40dB of gain. The +40dB gain is high enough to see the influence of the 500 rack power supply without obscuring the test results by the preamplifier residual noise.

The FFT plots show the levels and the nature of the noise taken from the preamplifier outputs.

The 500 preamps were installed in the first slot, the furthest from the PSU compartment to minimize the proximity effect and electromagnetic coupling, This way we could test the impact of the switcher residue transmitted over the power supply rails.

The noise performance plots at +40dB of gain for both preamplifiers are presented on the graph below. 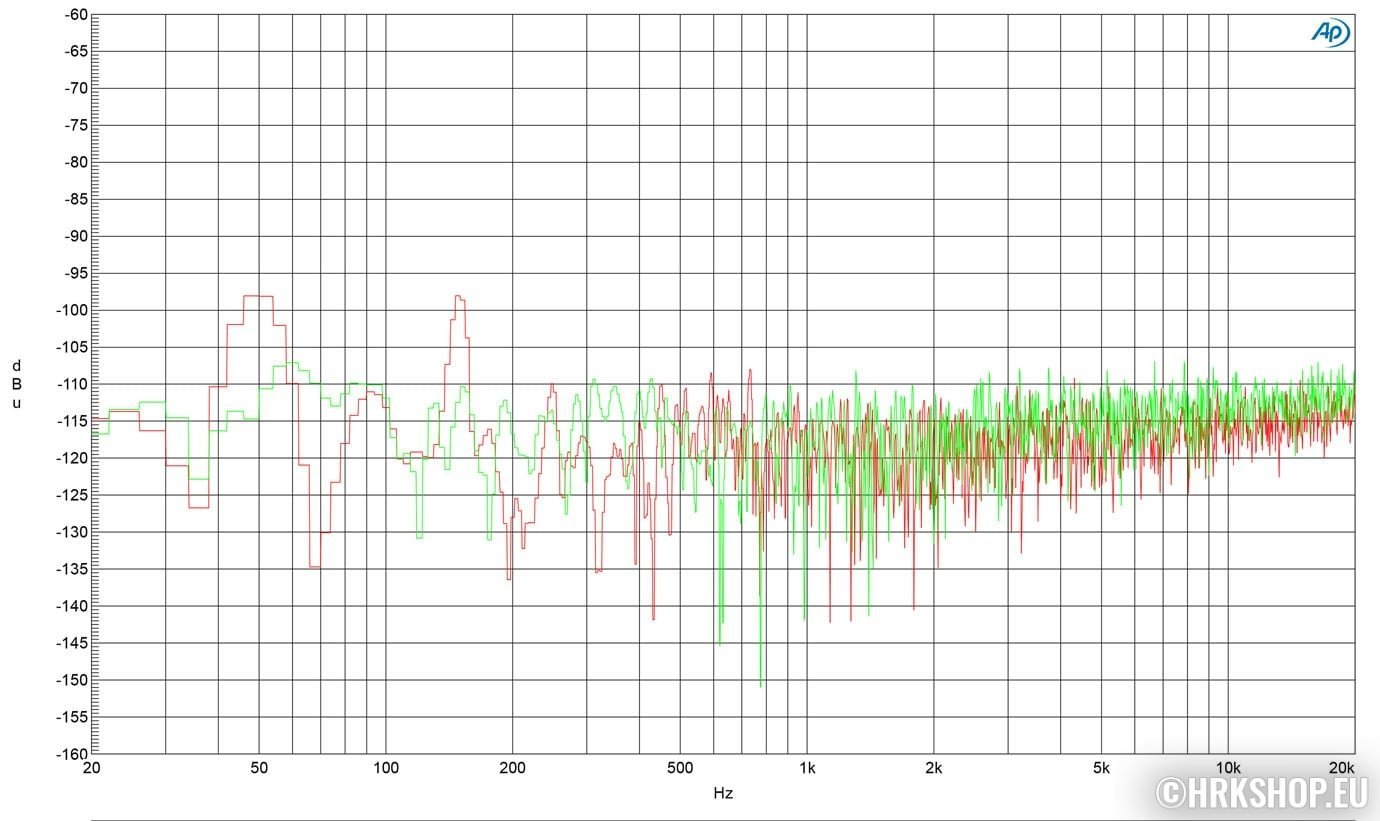 The NEVE 1073LB plot shows a slight increase of the noise at 50Hz and 150Hz which is expected due to the use of transformers on the input and output. This noise is mainly the ambient 50Hz electromagnetic smog present practically everywhere.

The MP568C plot has less 50Hz noise and almost no other mains harmonics. This is because the MP568C has no transformers and the 50Hz smog can induce the interferences only on the PCB tracks.

Apart from the above both plots are quite similar.

The amplitude of the noise floor voltage was on average at -84dBu with the 150R input termination in 10Hz – 22kHz bandwidth for both preamplifiers. Which should be considered as a good result at +40dB of gain.

To test the influence of SMPS proximity we have installed both preamplifiers in the last slot, next to the PSU compartment.

As expected the test results revealed the existence of the electromagnetic and electrostatic coupling between the MIDAS L6 PSU and the preamplifiers circuitry.

The noise performance plots at +40dB of gain for both preamplifiers are presented on the graph below. 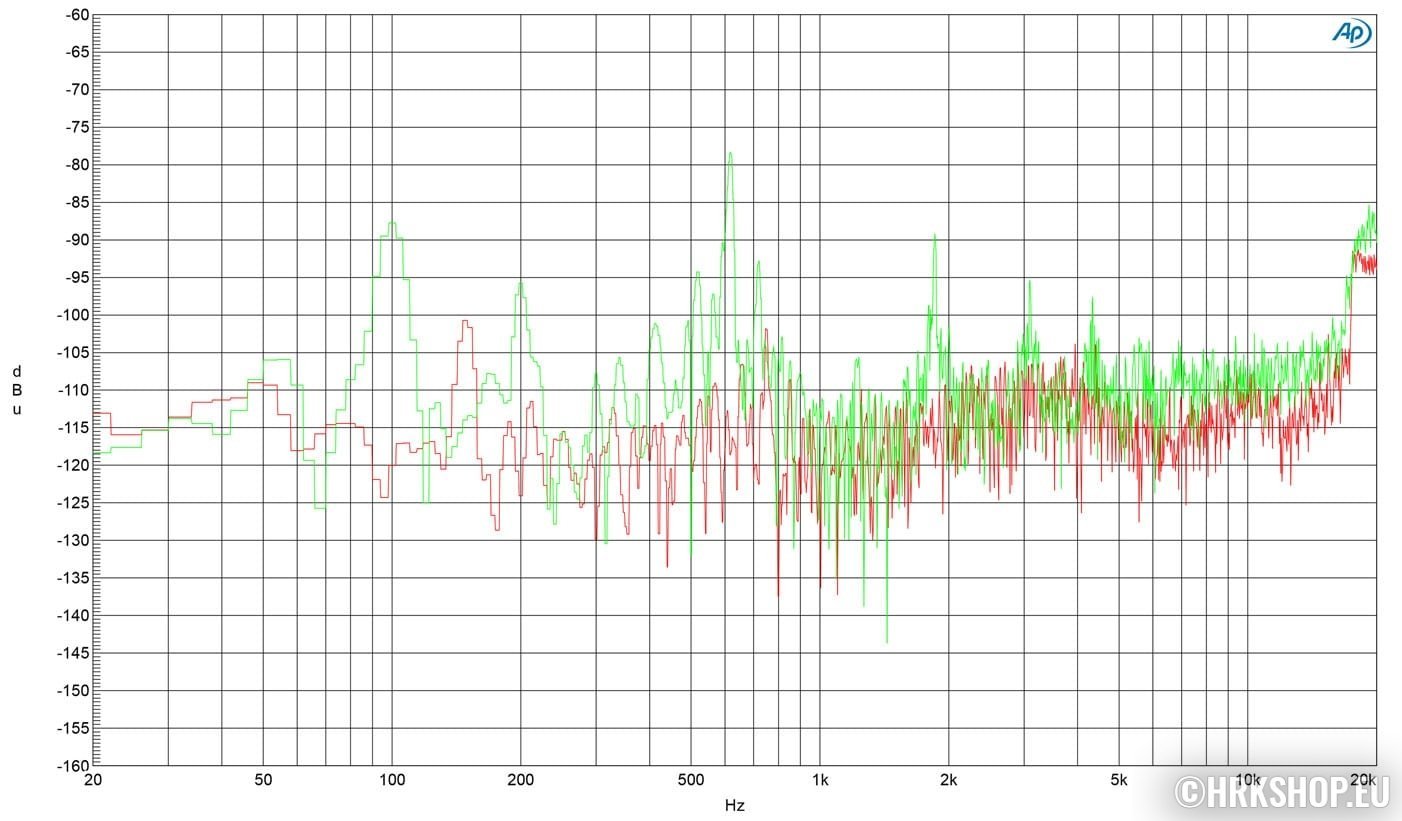 The MP568C was greatly affected by the electromagnetic and electrostatic coupling with the MIDAS L6 PSU due to the open, no chassis design. We can see a whole lot of harmonics in the mid-frequency range. The 50Hz, 100Hz, and 150Hz mains harmonics are clearly visible. This indicates the coupling between the mains part of the rack PSU and the preamplifier.

Although the results may look bad, if compared to previous plots, we should look at the numbers. The highest harmonic peeks at -78dBu for 620Hz which is still far below any audible noise floor level. The same goes for 100Hz which peeks at -88dBu.

For comparison, a decent microphone preamplifier has EIN value of -126dBu at +65dB of gain which translates to -61dBu of the residual noise floor.

The amplitude of the noise floor voltage was on average at -70dBu with the 150R input termination in 10Hz – 22kHz bandwidth for both preamplifiers. Which should be considered as a decent result at +40dB of gain.

The NEVE 1073LB has a full chassis which reduces the electrostatic and electromagnetic coupling with the rack PSU. We can see that 50Hz and 150Hz harmonic are still present.

The spike at around 20kHz in both plots is quite interesting. It is a bit lower for 1073. Most probably this is the lower spectrum of the PSU switcher frequency and it is transmitted most likely via electromagnetic coupling.

The average noise floor level produced by the 1073 and the MP568C is practically the same because both preamplifiers pick a similar amount of interferences.

As expected the Switch Mode Power Supply can have a negative influence on the performance of the audio equipment.

It is also obvious that the sensitive microphone preamplifiers should be installed far away from the PSU compartment. The closer to the 500 Rack PSU, the bigger is the chance for the unwanted noise and harmonics will appear in the recorded or processed signal.

The chassis helps to reduce the levels of some harmonics but it doesn’t eliminate the overall noise problem completely.

Taking all the above results under the consideration we can recommend the MIDAS L6 especially since the price is very attractive, which is an important factor for many audio engineering enthusiasts.

We hope that this article will help you. If you have found our work useful, share it with others. 🙂

In the next article we will present the test results for the Bento 6 rack, which is also a very popular 500 rack, so stay tuned… 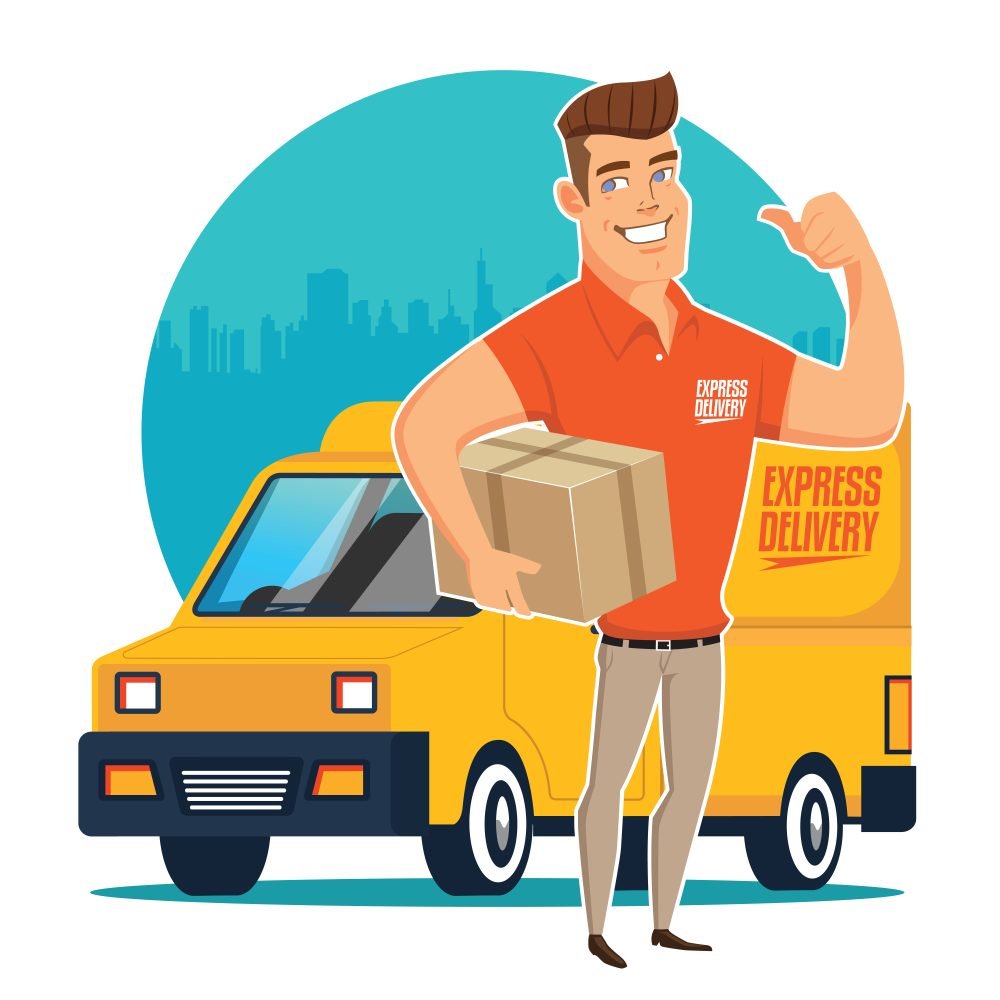